Rome is magnificent and overwhelming at the same time. It’s a showcase of Western civilization, with astonishingly ancient sights and a modern vibrancy.

This is the cradle of occidental civilization and Christian culture, of lakes and legends, of thermal spas and history, of ancient roads and verdant hills. Lazio is a region of central Italy bordered by the Tyrrhenian Sea,traverse by the waters of the Tiber River and mainly characterized by hills and mountains, while it slopes down near the coast.

Rome is magnificent and overwhelming at the same time. It’s a showcase of Western civilization, with astonishingly ancient sights and a modern vibrancy. As you peel through its fascinating and jumbled layers, you’ll find the marble ruins of ancient times, tangled streets of the medieval world, early Christian churches, grand Renaissance buildings and statues, Baroque fountains and facades, 21st-century traffic, and nearly three million people. Visit St. Peter’s, the greatest church on earth, learn something about eternity by touring the huge Vatican Museums, ramble among the rabble and rubble through ancient Rome’s Colosseum and Forum, savor the sumptuous Borghese Gallery, and take an early evening stroll with Rome’s beautiful people. 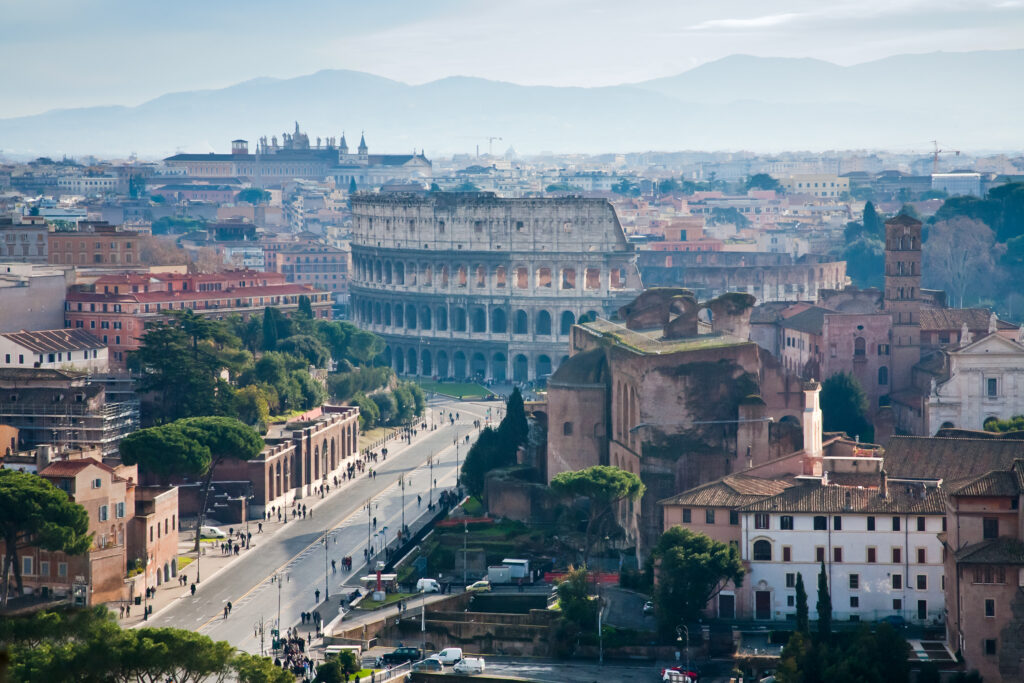 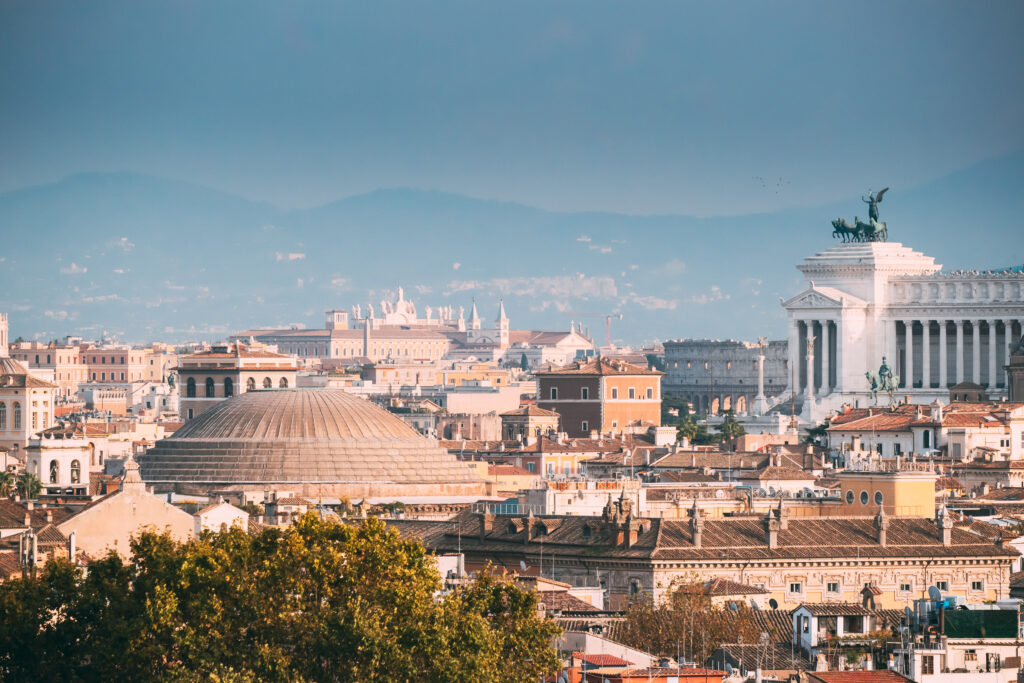 More than a museum, the Borghese Gallery is a beautiful villa in a delightful urban-park setting. Visitors get to see great works of art in the setting for which they were commissioned by the Borghese family. Masterpieces by Baroque masters Bernini and Caravaggio are among the many highlights. (3½ min)

Part one of three shows on the Eternal City, this episode resurrects the rubble and brings back to life the capital of the ancient world. Focusing on the grandeur of classical Rome, we’ll admire the groundbreaking architecture at the Colosseum and Pantheon, and the empire’s exquisite art at the Capitoline Museum. Then we’ll head out on a bike ride along the ancient Appian Way and take in nearby marvels of Roman engineering.

In this third of three shows on the Eternal City, we’ll explore this grand metropolis — so rich in art and culture — on a more intimate scale, delving into its back lanes and unheralded corners. Venturing through the crusty Trastevere district, visiting the historic Jewish Ghetto, and enjoying art treasures in a string of rarely visited churches, we uncover charms of hidden Rome that compete with its marquee sights.

This second of three shows on Rome reveals a city busy with life and bursting with Baroque. We’ll ramble through the venerable heart of Rome, admire breathtaking Bernini statues, ponder sunbeams inside St. Peter’s Basilica at the Vatican, and mix and mingle with the Romans during an early-evening stroll. Following an exquisite Roman dinner, we’ll join locals after dark, lacing together the Eternal City’s most romantic nightspots.

This is the cradle of occidental civilization and Christian culture, of lakes and legends, of thermal spas and history, of ancient roads and verdant hills. Lazio is a region of central Italy bordered by the Tyrrhenian Sea,traverse by the waters of the Tiber River and mainly characterized by hills and mountains, while it slopes down near the coast.
This region has different yet complementary features, unblemished sceneries and spectacular horizons among the towns. Visitors can enjoy incredibly beautiful views, like Villa Borghese in Rome, the Italian capital.
Villa Borghese is the most famous city park for walking or cycling. It represents an unparalleled experience between art, containing the Borghese Gallery with its masterpieces, and the nature surrounding it, including lakes and ancient trees. Lazio is also full of spas, whose history is bound to the several thermal water springs that had great success in the Republican Age and continued to be used in the Imperial Age. The Romans built sumptuous thermal baths and we can still admire their vestiges around the territory; first of all, the Terme di Caracalla (now in a state of magnificent ruins) in the heart of Rome.
Tivoli is another spa, but its fame is mainly due to the artistic beauties it contains, like Villa D’Este, with its splendid fountains, gardens and magnificent palace of the Renaissance, and Villa Adriana, the ancient residence of emperor Hadrian. The two villas are on the UNESCO World Heritage List.
For those who prefer the sea, this region offers some pearls such as Gaeta, Sabaudia, San Felice Circeo, Sperlonga and the Islands of Ponza and Ventotene, while those who love lakes will enjoy Bracciano, an enchanting stretch of water encircled by the intense green of the surrounding nature and overlooked by a magnificent 16th-Century castle. Walking along the Medieval streets of the villages by the shores of the lake, visitors can feel that these places are not only bound to the Roman Empire, but were also the theatre of various historical periods. Lake Bolsena, in the area of Viterbo, gives us an example of it, as it is the biggest volcanic lake in Europe and encloses two islands, Bisentina and Martana. This lake combines the charm of lush nature and splendid view,s with the history and traces left by the Etruscans, Romans and successive populations.
Finally, mountain lovers will not be left disappointed by Lazio, thanks to the ski resorts of Terminillo, Livata and Campo Staffi. This land evokes memories of unrivalled places and intense emotions, but also a clear perception of the relentless march of time, that justifies the attempts of our ancestors to challenge time and leave us their remembrance.

The provinces of the region are: Rome (regional capital), Frosinone, Latina, Rieti and Viterbo.

Getting to know and discovering Lazio is like leafing through a history book; each page is connected to the other by a series of events that left their mark. This is Rome, the “Eternal City” in the eyes of visitors; it includes a series of traces to follow in order to reconstruct the course of history.

First stop in the heart of Rome is the solemn Flavian amphitheatre, better known as the Colosseum, where the gladiator games took place; Via dei Fori Imperiali leads along the most important archeological itinerary, a unique set of temples, basilicas, public and sacred buildings and the Roman Forum standing out of the surrounding lush vegetation. The archaeological finds and highly valuable works that were discovered during the excavations are kept in the Capitoline Museums, on the Campidoglio, the acropolis of ancient Rome.
Not far from there is the Theatre of Marcellus and the famous Mouth of Truth, a marble carving representing the face of a faun near the Church of Santa Maria in Cosmedin; this mouth, according to legend, swallows the hands of liars.

The tour of the city continues following the banks of the Tiber to Castel Sant’Angelo, a mausoleum for the Emperor Hadrian, a shelter for popes and a prison. From there, taking the spectacular Via della Conciliazione, we reach the Vatican City, the seat of the Papal State. Here we can admire the famous Piazza San Pietro, with the 16th-Century colonnade by Bernini and the magnificent Sistine Chapel, with its precious Last Judgement, another 16th-Century masterpiece, this time by Michelangelo.

Rome is the main seat of State institutions and we certainly cannot forget its buildings, basilicas and piazzas, like Piazza di Spagna with the famous Spanish steps of Trinità dei Monti, Piazza Farnese and Piazza Navona with Bernini’s Fountain of the Four Rivers, not to mention the 18th-Century Trevi Fountain, where tourists throw coins and express their wish to return to the Eternal City.

In the environs of Rome, the Castelli Romani are a big attraction to those who love cheerful trips to the country to find a cool refuge in hot summer nights. Ostia, on the contrary, besides being a well-known sea resort on Lazio’s coast, encloses the ruins of Ostia Antica (ancient Ostia), the best example of a Roman town that we can still observe today.
Approximately 25 miles from Rome, the town of Tivoli demands a visit, given that it hosts two ancient, lavish estates: Hadrian’s Villa and Villa d’Este, both UNESCO World Heritage Sites.

Other of Lazio’s provinces worth mentioning offer delightful surprises. An important community since Antiquity, Rieti is rich in traces from the Roman and Medieval (when it was a free Comune and then Papal Residence) Ages. Latina, rather, boasts glorious beaches lapped by the Tyrrhennian Sea, along with suggestive old villages and the National Park of Circeo. Plenty of green, verdant land and enchanting Medieval towns characterize Tuscia and its Provincial Capital, Viterbo, oases for relaxation and delicious cuisine, as well as Etruscan heritage and the Via Francigena. Not as well-known, despite the many beauties of the terrain, Ciociaria treats visitors to gorgeous landscapes and evocative places plunged in both natural and historic environments.

These itineraries through nature take travelers on a discovery of these parks, where birdwatchers can admire many bird species year-round. In the Regional Natural Park of Bracciano-Martignano, the two homonymous lakes are an attraction for sailors and canoeists, while for those who prefer the sea, the Pontine Archipelago offers scuba-divers the opportunity to explore its beautiful seabeds, rich in flora and fauna.

The spas are a prime attraction for those seeking out health and beauty treatments and relaxation; Fiuggi, Tivoli, and Viterbo, just to mention a few of, combine the ancient charm of their origins and wellness with well-equipped, state-of-the-art facilities. Those who prefer the mountains, besides visiting the well-known ski resorts of Terminillo, Leonessa and Arcinazzo, can take trekking, cycle tourism, mountain biking, hiking, climbing and walking excursions among the Region’s peaks.

And what about Rome? As Capital, it offers all that you can find in big cities, in addition to its famous artistic beauties beloved all over the world, cultural itineraries and events, exhibits, festivals and more. Additionally, the big four Roman shopping streets – Via dei Condotti, Via Frattina, Via Borgognona and Via Margutta – offer the best of Italian and international Made in Italy fashions, all inside period buildings and incomparable settings, for instance, the Spanish Steps!

Finally, literary cafés and aperitivi spots line the charming piazzas of the Historic Center and on Via Veneto, the backdrop to Fellini’s La Dolce Vita and the symbol – with its trendy cafés and restaurants – of a decade that made modern history. Yet, Rome is much more and must be discovered layer by layer; every hidden corner conceals a trove of interesting surprises – for example, the singular and awe-inspiring view of St. Peter’s Dome through, of all places, the Knights of Malta Keyhole on the Aventine Hill.

This website uses cookies to improve your experience while you navigate through the website. Out of these cookies, the cookies that are categorized as necessary are stored on your browser as they are essential for the working of basic functionalities of the website. We also use third-party cookies that help us analyze and understand how you use this website. These cookies will be stored in your browser only with your consent. You also have the option to opt-out of these cookies. But opting out of some of these cookies may have an effect on your browsing experience.
Necessary Sempre abilitato
Necessary cookies are absolutely essential for the website to function properly. This category only includes cookies that ensures basic functionalities and security features of the website. These cookies do not store any personal information.
Non-necessary
Any cookies that may not be particularly necessary for the website to function and is used specifically to collect user personal data via analytics, ads, other embedded contents are termed as non-necessary cookies. It is mandatory to procure user consent prior to running these cookies on your website.
ACCETTA E SALVA
Language »